The impact of lung diseases and the number of people affected are increasing. Something has to happen!

The World Health Organization (WHO) calculated that lung diseases demanded at least 7.7 million deaths worldwide in 2011. Thus we are at number one of the list of deaths. We left ischemic heart diseases, with 7 million victims, behind us. Additionally: within the cancer-related mortality rates, lung cancer takes the lead. And what do you estimate? What is the percentage of people that dies within two years after been hospitalized for a heart attack? That is 8 to 15%. In case of a lung aatck this percentage raises to -a shock- 35 to 50%! And the numbers are rising. In short: Lung diseases constitute an increasing burden to society. 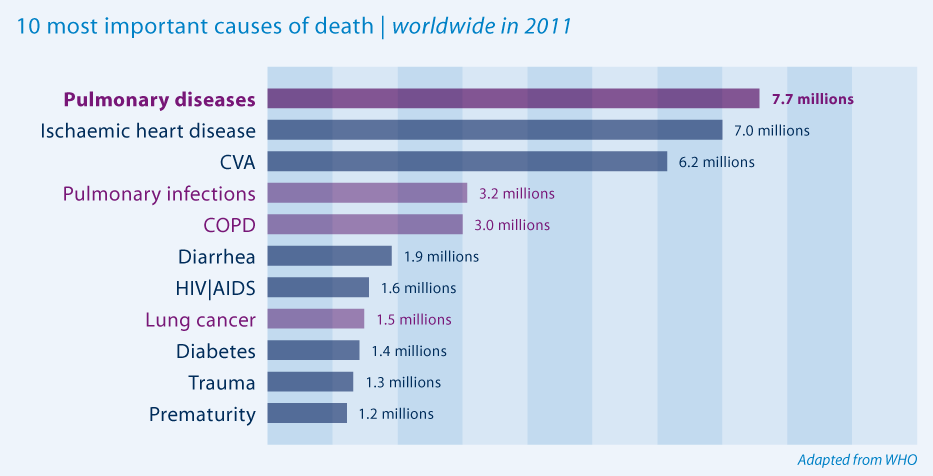 Lung research has yielded many good results the last few years. For instance, effective treatment methods have been developed for asthma, the success of lung transplants has increased, there is a better treatment for cystic fibrosis, and it has also been clearly shown that non-smokers and people who quit smoking are less likely to develop lung cancer. Such findings directly contribute to improving the prevention and treatment of lung diseases, in association with vast increases in the quality of life of people. But the numbers show that this is not enough.

Donations and grants for lung research

We are not so successful to translate the above to the general public. While in 2012 the Dutch cancer society received more than 146 million Euros in donations and the Dutch Heart Foundation more than 39 million, this was set at just over 15 million with the Dutch Lung Foundation. At the same time, the grants for lung research in the EU (the FP7 program) lags far behind in comparison to research in other disease areas.

The National Program for Respiratory Research wants to highlight the importance of lung research. At the same time the National Program for Respiratory Research wishes to improve the opportunities and perspectives of respiratory research. Thus, we hope to drastically reduce the number of victims and the severity of the diseases. And as a consequence we hope to drop considerably in the list of fatal diseases.

WANTED: Researchers that wish to make a difference..

We are looking for more

How we call a stop to lung diseases?

Professionals from the broad field of lung diseases in

On the road to the science of tomorrow!

People are insufficiently aware of the fact that lung diseases... Read more

If we wish to bring basic and applied lung research in the Netherlands to a... Read more

There is already much important research ongoing in the Netherlands... Read more

Innovative research not only leads breakthroughs in prevention and... Read more

In the interplay of research and ' personalized medicine ' biobanks... Read more

Within the field of science and care there are constantly new developments... Read more